The LCSD has, once again, closed its facilities. Clubs do not want to play at training grounds. The season must end by May 31. No one wants to terminate the season.

Something has to give.

The Hong Kong Football Association announced Monday afternoon that the Premier League season would be suspended for a period of three weeks until April 13. The decision comes on the back of the Leisure and Cultural Services Department’s announcement Saturday that it would close all facilities reopened earlier in the month.

Following a two-hour special board of directors meeting, CEO Paul Woodland said in a statement, “It is unfortunate that the number of COVID-19 cases has risen in Hong Kong and the HKFA will act on the advice given by the Medical Committee that for the health and safety of players and all other persons at matches. A decision has been made to suspend all matches with immediate effect for a period on three weeks.”

Chairman Pui Kwan-kay told assembled media at the HFKA’s headquarters that the organization had no choice given that it was impossible to play on after the LCSD’s announcement. “For now, the Premier League must be suspended so that we can reassess the situation,” he said. “We hope that the pandemic will pass as soon as possible so that we can complete the season.

“The HKFA will always put the health and safety of players first. After three weeks, we will evaluate our options and determine if more needs to be done.”

Woodland explained to reporters that the board weighed several options over the weekend before settling on a three-week suspension of league play, coupled with a two-week closure of the HKFA’s Football Training Centre. He described the decision as “appropriate” because it would allow clubs enough time to prepare in the event that the season was to start up again in three weeks. While clubs are not obligated to suspend training, Woodland encouraged them to do so.

A meeting between the HKFA and Premier League clubs scheduled for Tuesday was tentatively rescheduled until April 7.

“We are still aiming at finishing the season in May but it depends on the developments regarding the virus,” says HKFA chairman Pui Kwan-kay. (Credit: Chung Ka-Ming)

Chan Hiu-ming, head coach of Lee Man, also agreed to stop training, adding, “Under these conditions, I feel that suspending the league is the right decision. At the end of the day, saving lives is what is most important.”

Eastern head coach and technical director Lee Chi-kin was not present at the meeting but spoke with reporters following his team’s final training session, for the time being. “Everybody understands that, over the next two weeks, Hong Kong will be at the peak of the pandemic,” he said.

“Whether LCSD venues will reopen in three weeks or whether we will have to play matches at the FTC again is yet to be determined but I hope the situation will improve. Whether the league season can be completed is not important.

“There is nothing more important than life, and football is no exception. I hope that all corners of the community can rally together and collectively, we can fight this battle against the pandemic together.”

Lee Chi-kin’s Eastern side are on the brink of returning to Asia but understands that the suspension is for the best. (Credit: Eastern)

Lee stated that his club would not train again for two weeks. In the meantime, he would ask the club’s fitness coach and physiotherapist to arrange for players to do a moderate amount of training at home. Eastern will also require each player to measure their temperatures daily and report to management immediately if they experience any coronavirus related symptoms.

Peter Man, head coach of Pegasus, commented that while his team would also suspend training, his players would be required to continue to work out at the club’s headquarters in Kwai Chung. In order to minimize the number of players at the facility, he said that the club would arrange for players to arrive at different times.

“There are no venues for lower division matches. These are also weekend centric competitions which makes it difficult to rearrange.”

As for shortening the season, Pui said that the HKFA wanted to avoid this if possible. He continued, “If the season is stopped, if the sponsors stopped making their monthly payments, if there are no gate receipts, then clubs will continue to lose income.

“But player salaries must continue to be paid until the end of May. So, if there is no sponsorship money, then there is no way to pay salaries and clubs with tighter budgets will encounter problems.”

The chairman confirmed that while clubs would not directly receive relief aid from the government, expenses such as broadcast fees, venue rentals and the wages of matchday staff would be subsidized in order to reduce the financial strain on the clubs during the present crisis.

When asked about the possibility of extending the season, Lee revealed to reporters that his club would not be concerned because most of his players’ contracts ended in June. However, Woodland emphatically dismissed this possibility and reiterated that the season must end by May 31.

He added that if the league resumes, the HKFA may schedule matches every day of the week with some clubs playing as often as every three days. Although a return to the FTC would be an absolute last resort, the CEO stated that if matches return to the training ground, the HKFA may prohibit players from using the dressing room or shower facilities.

Asked what the HFKA would do if a player were to test positive for the coronavirus, Woodland cautioned that he would first seek the advice of a medical officer but did not rule out mandatory testing for all Premier League players. 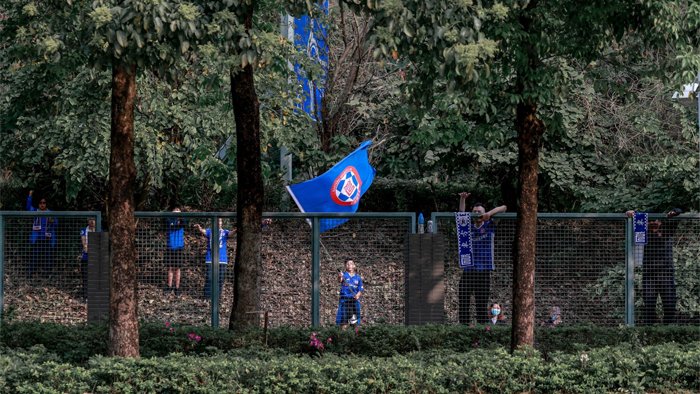 Some fans decided to ignore the government’s plea to stay indoors in order to cheer on their team from outside the ground. (Credit: Eastern)

In the event that the HKFA terminates the remainder of the season, it would still require a method of determining its two Asian competition berths. Currently, R&F sit atop the league table after nine rounds of football while both R&F and Eastern have qualified for the HKFA Cup Final.

When asked about this, R&F head coach Yeung Ching-kwong replied, “If we have to play additional matches to determine who qualifies for Asia…then we can accept this. What we will not accept is scrapping all of the results for this season. This would be an injustice because everyone worked hard for those results.

“At present, the situation is severe so we have to take the time to assess the situation. But we do not hope that the season will be delayed much longer. We hope that in three weeks’ time, we will have more definitive answers because if we keep delaying then who knows if we’ll ever finish.”

Chan was similarly concerned about how the delay would affect his players’ readiness for action. He stated, “As a coach, (suspending the season) is difficult. Football is not a sport where you can stop for two to three weeks and then expect to be match fit again after training for a few days.

“Frankly, given the choice between suspending the season or cancelling the rest of the season, cancellation would make it much easier for us to make plans.”