On April 25th, Benfica de Macau will play the fourth match of the AFC Cup group stage, after their big defeat in Pyongyang on match day 3.

Benfica de Macau came into the 3rd match as leaders of group I, with the same amount of points as April 25. Two wins in two games was a dream debut for the Macau champions in this competition, but Benfica were forcefully called back to the ground after being trashed 8-0 by the North Korean champions.

Benfica had some problems prior to the match in Pyongyang, since most of the players have not received authorization by their employers to travel on a week day, so in th eend only 14 players traveled to Pyongyang. Among them, one of the players was injured and another other was the substitute goalkeeper, so the options for Benfica coach Bernardo Tavares were extremely limited when he faced the best team in North Korea, who were seen as the big favourites to win the group.

One of the reasons for this big defeat was the lack of squad depth, since in the end of the first half the result was only 2-0, with goals scored by Kim Yu Song and Ri Hyong-Jin. The second half was when the match got out of control and Benfica suffered six goals in less than 30 minutes, with goals scored by An Il-Born (2), Kim Yu Song (3) and Ri Hyong-Jin.

Despite the lack of match video highlights, it is easy to conclude that Kim Yu Song was the man of the match, with 4 goals scored, and he will be the player that Benfica need to look out for in the return leg.

The match in Macau will be played on an important day for DPR Korea, the 25th of April, and Benfica will try to spoil the party since winning this match will be crucial to qualify for the next stage. Benfica can count on the entire squad this time, the only doubt will be in defense, since both of the center backs, Filipe Duarte and Vitor Almeida, are injured. Two first team midfielders, Cuco and Edgar Teixeira, are also in doubt for the match, but there is high hopes that all four players will recover and help Benfica to achieve a good result. 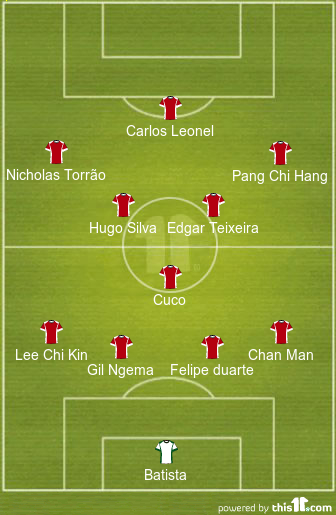 To get all three points, Benfica will have to control April 25’s attacking force, including the danger duo of An Il-Born and Kim Yu Song, and then strike on the counter. One of the key aspects of the match will be not to suffer a goal early in the match, to hold up against the initial pressure and then remain physically competitive until the end of the game. Benfica striker Carlos Leonel has had a great tournament so far, scoring important goals. The Macau international remains the big hope for a win and an opportunity to go through to the next stage of the competition. The Macau Elite League had a break last weekend, so players should be on full strength to fight and make history for Macau football.