Elite League champions Benfica Macau will be in action next Sunday when they participate in the 2017 AFC Cup play-off qualifiers in Kyrgyzstan. It will be the second time that they enter the competition, following their debut last year when the matches were also hosted in Central Asia.

Benfica Macau have definitely more experience now and this season the team anticipated this competition right from the start by integrating more local players in the squad. Only two foreign aids are permited in this phase of the AFC Cup. Benfica coach Henrique Nunes chose two midfielders, both from Portugal: Marco Meireles and Jose Filipe. Some players were also added to the team just for this qualifiers, such as Macau national team goalkeeper Ho Man Fai, the Macau national team captain Paulo Cheng, Lee Keng Pang and Rafael Bastardo from Sporting Macau and Duarte Pinheiro and Lei Wa Si Vaselie from Casa de Portugal. Among these Ho Man Fai, Paulo Cheng and Lee Keng Pang are certainly the most valuable players and will probably appear directly in the first team. 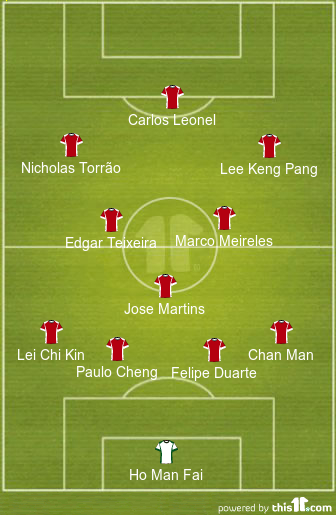 Despite losing both of their games last year, it was an important experience for Benfica, which might already pay off this time.

Benfica Macau are in Group A of the play-off, together with Rovers from Guam and Dordoi from Kyrgyzstan. The hosts Dordoi are definitely the biggest favourite to win the group, with 7 players in the Kyrgyz national team and with considerable experience in AFC competitions. They will also be backed by their own fans in the stadium.
For Rovers FC it will be the first time to participate, and although some believe that they won’t stand any realistic chance, they have had a lot of sucess in Guam, winning the league 3 years in a row.

The group stage will start on Friday with a match between Rovers and Dordoi. On Sunday Benfica Macau will play against Rovers and the last match of the group will be on Tuesday, when the Macanese champion takes on Dordoi .

Only the group winner will qualify for the next round. The best chance for Benfica to win the group would be to get the 3 points against Rovers and then force a decision in the final match against the home team. Benfica have definitely a decent squad this time, so this might be the perfect opportunity to achieve something historic for Macau football.

In the remaining two groups, there will be one team each from Nepal, Mongolia, and Combodia (Group B), as well as Bhutan, Chinese Taipei, and Bangladesh (Group C) fighting for an AFC Cup ticket.