As Benfica Macau and Hang Yuen FC from Taiwan will play their first match in the AFC Cup on Wednesday, March 7th. Afonso Pires talked with Taiwan football expert Mark Henderson, founder of the blog From The Tofu Bowl.

Benfica Macau will play their first ever match in the group stage of AFC Cup, despite the fact that the Macau champion had already participated two times in the in the play-off qualifiers round of the competition (2015 and 2016), this is the first time that the club has the opportunity to play in the group stage.

For this match, Benfica will probably start in a 4-5-1 formation, with the Brazilian Batista in the goal, the defense composed by Chan Man, Vitor Almeida, Gil Ngema and Lei Chi Kin, on the middle of the pitch will play Cuco, Edgar Teixeira and Hugo Silva, on the wings will play Nicholas Torrão and Pang Chi Hang and up front will start Carlos Leonel. If the coach, Bernardo Tavares, want´s to have a more offensive approach, can start in a 4-4-2 formation with the Kyrgyz David Tetteh and Carlos Leonel up front instead. 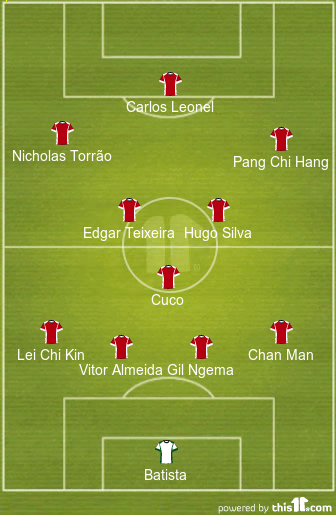 Benfica Macau coach, Bernardo Tavares, was apprehensive and not overconfident for the game: “I have only watched one game from them on the internet which is not much to have a clear idea of Hang Yuen FC. Like us, they are also prepared for this competition, so we can´t be to much confident just because we are leading the league undefeated. One thing is Macau league, and another is one competition like AFC Cup, that´s another responsibility”

Benfica will try to have most of the ball possession and control the match, but the outcome of it will depend if the team can deal with the pressure of playing in this competition at home for the first time.

Afonso: Can you explain a bit how the Taiwan Premier League works? Is it a professional competition?

Mark: The Taiwan Premier League underwent a weird revamp at the start of last season. Under the new guise, however, not much is actually different once you scratch the surface and dig a bit deeper behind the fancy re-branding. The only key changes as far as I can tell are that each team plays each other 4 times now instead of two and at the end of the season 1st place plays 2nd place, and 3rd place plays 4th place to decide who finishes 1st, 2nd, 3rd and 4th. During these games, the previous league placement doesn’t matter anymore in what can only be described as adopting a shitty American style play-off system which could be an attempt to appeal to more people as Taiwanese are used to the American sports format.

Before the revamp, they had what could be considered a regular system equal to that of the rest of the footballing world. Each team would play each other twice ‘home’ and ‘away’ but there is no real home or away ground with the games being hosted at different venues around Taiwan, some in Tainan, some in Taipei and some in Kaohsiung. All teams will play at the same venue during each round of games. This was called the Inter-City league. All teams still play all games at the same venues in the Taiwan Premier League.

The league isn’t professional but the CTFA and people involved in football here have been talking about starting a professional league at some point, and I heard this being said 8 years ago when I first moved here, so I wouldn’t be holding my breath thinking that it’s just around the corner. As I know of, Taipower and Datong pay their players and can be considered professional or semi-pro, I’ve heard their players work for their factories and I have also heard that they’re registered as kind of ghost workers who don’t go there. My guess is it’s most likely a mix of both, as not all their players will work for them. There is no way of ever knowing for sure, because there isn’t even anything wrote about it in Chinese and there’s not a hope of finding any information about this kind of topic in English. I’ve also heard some other teams have started paying some money but it’s unclear how much and if it is to some players, or all players. It’s also unclear if it is expenses or a monthly salary. No teams here ever list or say anything publicly about this.

Before they even think about creating a professional league they should try and generate more interest in football throughout the island at school age level. Therefore they can create an interest as younger generations grow older but at the same time the league doesn’t really represent any demographic of society. The league is made up of two big Taiwanese companies, some universities and a couple of expat teams. They need to make each team represent a town, or a city or a village and that would help to create more interest. Just making the league professional won’t make a jot of difference and could have an adverse effect of actually destroying the game if teams end up not being able to pay players wages.

A: Tell us a little bit about the history and achievements of Hang Yuen FC. What is the real name of the club, Hang Yuen FC, Fu Jen University or Air Source Development?

M: Hang Yuen is just a company name. It is something odd which I haven’t seen or heard of in any other country until I moved here, for some reason unknown to people; Hang Yuen will sponsor 1 different league team each year. So Air Source Development and Fujen Univeristy are two different teams who have each been sponsored by Hang Yuen for a season. Benfica Macau will really be playing against Fujen Univeristy who are sponsored by Hang Yuen, but it seems one of their conditions is that their name be used, which is confusing for anyone who doesn’t know about the league here.

A: Taipower FC and Tatung FC are the powerhouses of Taiwan football, how did Hang Yuen FC ended in the AFC Cup instead of one of the mentioned teams?

M: This is a very odd situation that I don’t really know the answer to myself. I know why but can’t find any info online to verify what information is true and what is not. Last season both Datong and Taipower were in the AFC Cup draw, and the fixtures were advertised on the CTFA (Chinese Taipei Football Association) website with dates and venues then suddenly it was all removed. When I checked on the AFC website I couldn’t find any information regarding what had happened to Datong and Taipower, but also on the AFC website their games had been removed.
What was said about in Taiwan was that both clubs pulled out. But who made them pull out and why did they pull out are questions that no one will know the answer to. Would on the street though was they just decided not to play.
Fujen ended up playing in the AFC Cup by virtue of their 3rd and 4th place play-off match. Fujen actually finished 4th in the final league table, but because they won that play-off match they were officially the 3rd placed team in the Taiwan Premier League, and by the virtue of Datong and Taipower not wanting to / or not being allowed to participate meant Fujen got the opportunity.

A: What are the Hang Yuen FC key players? Did they sign any new players for the AFC Cup?

M: My friend told me that Fujen (Hang Yuen) have just signed a new Haitian player, but he couldn’t remember his name. He has played in the equivalent of the AFC Cup in Concacaff and the MLS so he said he will be by far their best player. Other than that normally Fujen work well as a team and don’t have any stand out players. They strength is how they play together as a team.

A: What strategy do you expect Hang Yuen FC will use against Benfica? What is your prediction for the match?

M: Taiwanese teams have a very ingrained way of playing football. They like to try and keep the ball, and pass, pass, pass. They will pass it around the back, pass it around the middle and wait and wait until they have an opportunity to play a through ball. Either a straight through ball to split the center backs, or a long diagonal ball attempting to get in behind the full backs and exploit the wings. Whichever of these balls is played they try and get their fastest guys running onto to them to stretch the opposition.
This is the way a lot of Taiwanese teams like to play, even the national team did this every game until very recently. Often teams here don’t like being pressed much, and when they’re pressed especially in areas where they like to keep possesion or moving the ball around they have known to be prone to making costly mistakes.

I don’t know a lot about football in Macau, but I have often saw that Benfica Macau are the best team, and as that is the case I cannot see Fujen winning the game. I think a draw would be the best result but I will say Benfica Macau will win the game 3-2.