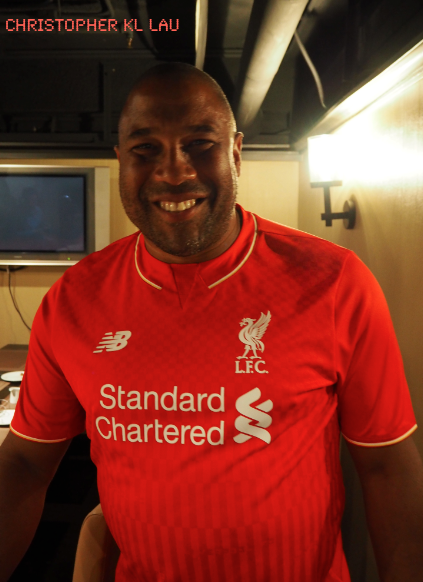 For his legendary footballing pedigree, the Liverpool legend, John Barnes, is very much the larger than life personality you would expect him to be and much more. Beyond the exquisite footballing skills is an astute observer of the modern game who is both personable and articulate and happy to share his experiences and his opinions of the game he so clearly still loves. It is through his out-going persona, that despite having retired a while ago now, he is still beloved by football fans the world over and this was very evident this past weekend in Hong Kong as Barnes was the big name star attraction at this weekend’s Liverpool FC Soccer Clinic, which was organized by Standard Chartered, the club’s sponsor. Here, Barnes and four Liverpool FC International Academy coaches passed on knowledge and wisdom to wide eyed Hong Kong youngsters eager to develop their own skills. The English Premier League is huge in Hong Kong and Liverpool have a devoted fan base and will always draw in fans young and old.

From Jamaica to Watford to being a pioneering footballer for both Liverpool and England who once danced around the Brazilian defense in the Maracana to dazzling a global audience at Italia 1990, John Barnes has packed several lifetimes into one. Since retirement, Barnes has devoted himself to both media and charity work and this includes football clinics promoting the Liverpool way to their global fan base. During a recent lunch discussion in Hong Kong, Barnes, through strength of his charisma of course held court as he discussed a whole plethora of issues ranging from the current Liverpool team to the attitudes of young players in England and how the lack of direction and hunger is stifling the development of a new generation of stars. 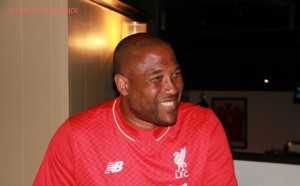 Early on in the discussion Barnes touched on Liverpool’s latest super star signing, manager Jürgen Klopp. He feels that Klopp will be given the breathing space that other managers may not receive because of his strong status and solid track record. He stated that “the harmony in Liverpool right now is good”, which he felt would translate into trust and time for the German rock star manager. He did say, however, that he felt Klopp needed to strengthen the squad for next season.

Barnes went on to talk about how fans of a number of the big clubs reminisce about the old ways such as the Manchester United way, the Liverpool way. Barnes said people “needed to stop comparing with the past”. What has to happen at Liverpool now, he said, is “the Jürgen Klopp way, because Jürgen Klopp is the manager”.  He also took a moment to bemoan the relentless chase for cash observed in the current game. Barnes noted the recent trend of relatively young players taking up big money offers in some of the wealthy emerging football nations like Qatar and China. He said it made him question their integrity as “they were going for the money”, not the football.

The conversation rounded up with Barnes’s predictions for the upcoming European championships. He felt it is “wide open” but that consistency was vital. He commented that a number of teams have it in them to pull a one-off result, but that putting together a last 16, quarter final, semi-final and then final run of wins was another matter altogether and as such he expects the “usual suspects” of France, Germany and Spain to come out as victors.

Astute, intelligent and witty, his playing days are long over and a wonderful memory for millions, though for John Barnes, wherever he goes in the world, he is definitely still the King of the Kop.

Given James Vardy’s progression from non-league football to the Premier league, do you think if he played in your era, he would have progressed much faster?

No, James Vardy is a very unique case because playing where James Vardy did, he wasn’t a player who had played at big clubs and not made it, he had been playing non-league football for a long time and lower division football and non league football is still about that ‘type’ of football, so the image of him and Kane sitting on the bench for Leicester in 2013; I just think it has been an incredible season and would we expect Jamie Vardy now to be doing this every season and the next season and scoring all those goals? Possibly not, it has just been an incredible time.

Playing in my time; lets put it this way, because of the majority of teams and the way they played in my time then yes, because of the directness of football, where as in recent years, in England, we have tried to say, ‘lets play like Spain’ with loads of passes and Jamie Vardy doesn’t suit that whereas Leicester suits him so Jamie Vardy can play for Leicester and score those goals.

I don’t think he (Vardy) could do that for Arsenal; I don’t think he could do that for Manchester United and I don’t think he could do that for another team. It is just that the football at Leicester suits him so forget James Vardy as there is also the rest of the team. Trevor Morgan is thirty two, Robert Huth, Danny Simpson, Drinkwater played at Manchester United reserves. They are not young so it is not like they were young kids not being given an opportunity and now they are showing their worth who are now coming to end of their careers and they are now going to win the league. They can’t go onto other clubs and be superstar players as no one is going to sign them; they found a ‘hole’ whereby there is a type of football which is still valid in terms of being direct, being strong and being committed whereas the emergence of the foreign players and managers in the Premier league means they (teams) are looking for special players who could play for Barcelona and managers who talk about tactics like one hundred passes in midfield.

Claudio Ranieri’s been very good at being good at just leaving it and saying ‘just go ahead’ while (Nigel) Pearson has to take a lot of credit as well as Claudio Ranieri is taking it on but I think Vardy has to find the right type of football which suits him. 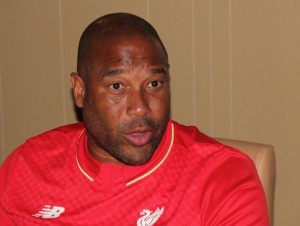 Do you think Jurgen Klopp truly embodies the Liverpool spirit and playing style? There have been several years of transitions so do you think they finally have the right manager?

I think he embodies the Liverpool philosophy. Not necessarily on the field but the relationship he has with the fans and the humility he has. I like the fact that he does not go around in a three piece suit and he is not clean shaven and he looks a little unkempt; ‘Scousers’ are like that and he is one of us! He is down to earth and he loves the relationship he should have with the fans.

Many people said that after the West Brom game, after they drew two all in the last minute, that it was a disgrace (to celebrate at the end of the game with fans) as scoring a last minute equalizer against West Brom is a disgrace when what he is trying to say, like Bill Shankly said, you want fans to support us even when we are not doing well and if the fans support us then that is why we came back to draw two all and that’s why when Liverpool were 3-1 down to Dortmund, if the fans did not support us, we would not have come back to win that game. It is important to have that relationship with the fans but we know what football is like as there is always a honeymoon period and the honeymoon period has been great but we have not been really consistent.

Unfortunately, we know what football is like; if all of a sudden half way through the season, we still are where we are, fans will get disappointed but at this moment in time, although we aren’t’ where we want to be; yes, we are Europa league but in terms of consistency in the league, the fans are still supporting him but like the England team, I would give England two years and then put pressure on them to perform. This year I didn’t put any pressure on them (Liverpool) at all because coming in ten games into the season is not ideal as any manager would want a pre-season with the players and implement his strategy, style and system and get the players in so this is why next year, I would expect much more in terms of consistency.