The defending league champions Kitchee picked up where they have left from the initial week of fixtures, and for the first time in franchise history, they faced the newly-joined Dreams FC in the Hong Kong Premier League. It turned out to be a memorable match for Brazilian striker Lucas Silva, who tallied four times to fuel the Bluewaves for a 7-0 rout at Mong Kok Stadium.

Although the visitors were competent to begin the meeting with five defenders to counter Kitchee’s usual 3-4-3 formation, the home side started a scoring fiesta in the 29th minute, when Lucas tapped in from close range on a header fed by Krisztian Vadocz. The Brazilian added another goal right before half time from the penalty spot after a more than debatable foul by Leung Kwok-wai. Bookings were given out to both Leung and Pablo Gallardo, who earned the yellow card for arguing with the referee’s decision.

After the break, Kitchee seemed even more dominant and exposed the weaknesses of the opposition. Fernando was brought down in the penalty box in the 59th minute, and this time Sandro, who missed the key penalty for Hong Kong in the recent Asian Cup qualifier against Malaysia, netted it perfectly to make it 3-0. Lucas almost turned the game into a one-man show by tallying two more goals. Finally, Jared Lum and substitute Lo Kwan-yee put their names on the scoreboard as well to complete the rout. 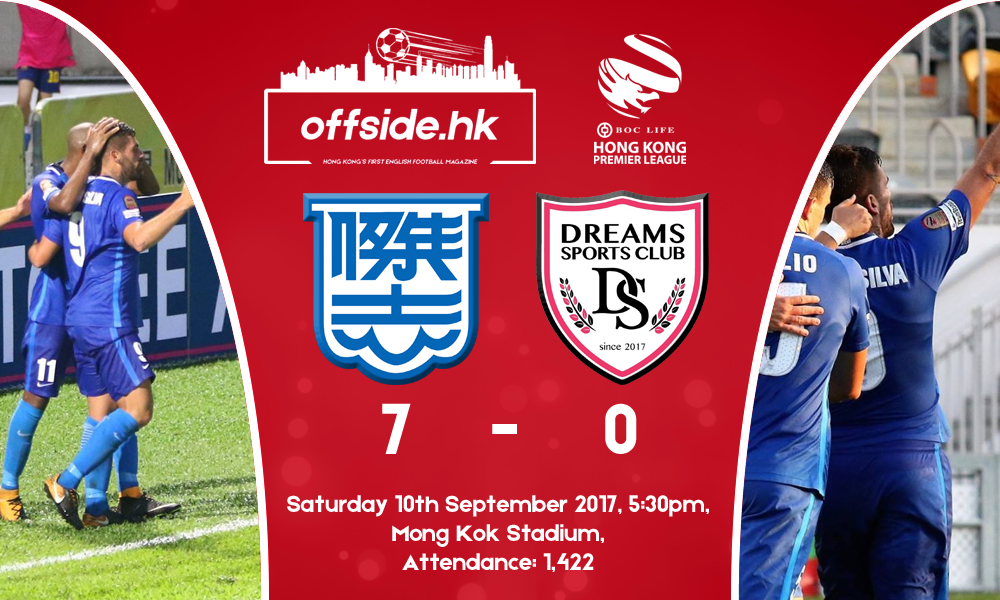 After earning their first point in a 1-1 tie with Tai Po two weeks ago, Dreams came up with very few chances throughout the game that were all denied by goalkeeper Wang Zhenpeng.

Moving into third-week actions, the streaking Kitchee will face Pegasus FC next Sunday at Hong Kong Stadium, and the game should give an early indication if the defending champions will have any serious rivals this season.