Vien Tsang is ubiquitous in the Hong Kong sports media scene and has been very proactive in covering local sports and can often be seen, heard and read in and on a number of different mediums: namely television, radio, magazines, online media newspapers and podcasts. Tsang, a floorball player, is always keen to promote sports and athletes in Hong Kong and believes a sports culture should be more deeply ingrained into everyday life. Tsang is also a huge football fan and has been in the privileged position to meet both past legends and current stars in her role as either a journalist and Emcee.

Interestingly, despite being so highly involved in sports media, Tsang did not study either journalism or anything sports-related. She got a lucky break which saw her dive headfirst into her ideal career.

“One thing that distinguishes myself from a lot of sports journalists in Hong Kong is that both my degrees were not either sport or journalism. My Bachelor’s degree is actually a major in Spanish with a minor in Journalism and Sociology. My Master’s degree is a Masters in Social Sciences in Media, Culture and Creative Cities from HKU.”

“When I look back, I didn’t get into this career through a ‘natural’ outcome but I’ve always been a sports fan. When I graduated, my friend told me she knew someone whose friend worked at a  newspaper where they had a vacancy and asked if I was interested. I was up for it and took the role!”

After getting her first taste of the media world, Tsang expanded her repertoire and skills and ended up sharing her love for sports by beaming into people’s living rooms as a television sports anchor and presenter. 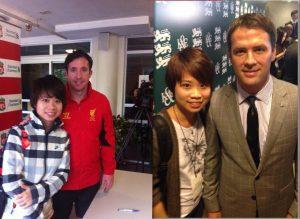 “Gradually, I shifted my career path to television news as I wanted more exposure to present my work. That’s how I got into the media industry, first as a sports journalist in newspapers (& online TV), then as a Sports Anchor & Reporter in TV news. I gradually established my freelance positions which include being a presenter on sports TV programmes, podcast shows, as well as an emcee and writer.”

Like all huge sports fans, Tsang first got her taste of football as a youngster, where flickering visuals and a sense of drama first captured her imagination. The first World Cup Tsang remembers was the one held in the United States in 1994.

Who could forget memories such as the incredible Argentina Vs Romania game, the tragedy of Colombia’s graceful defender Andres Escobar, Jack Charlton acknowledging Giants Stadium after Ireland defeated Italy, Letchkov’s flying header against Germany, Bebeto’s baby celebrations, Maradona’s wide-eyed gaze and so much more. Tsang remembers, if only vaguely, yet it sparked her love for the game.

“Under the influence of my parents, I started to watch football at a very young age and I naturally have that passion for the sport too. I still remember the 1994 World Cup, with my parents watching in the living room, and how I climbed out of my bed persistently again and again to join them despite the fact that  I kept falling asleep and they just put me back to bed. Haha.”

Tsang became enamoured with the game through the course of the 1998 World Cup and became a huge Micheal Owen fan. Life always takes its twists and turns and years later she ended up meeting Owen in person through her work. She also became a huge Liverpool fan and devoured all content on the Reds and she feels her English improved as a result as well.

“During World Cup 1998, Michael Owen rose as a promising global star and he became my idol. Since then, I started to support Liverpool. I spent quite some years, especially during my time as a student, catching almost every Liverpool game on television and follow their news.”

“I also tried to catch Liverpool’s exhibition games when they were in Hong Kong. Every day after school, I had a habit of going through stacks of newspapers and I intentionally read the sports page last as I saw it as the greatest pleasure of all! 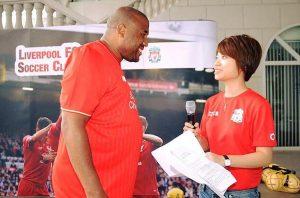 I think all these years of ‘growing up’ with Liverpool further strengthened my bond and interest in the sport. At the same time, in some way, it helped me learn better English as I used to follow the team news online almost every day.” 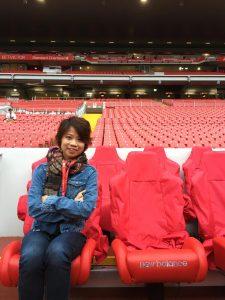 The football fan in her has been able to turn her passion into a career and has been fortunate to meet past legends and current players and she says most are down to earth and easy-going.

“Thanks to my media work, I have met some quite big names like John Barnes, Michael Owen, Sami Hyypia, David James and Emile Heskey. 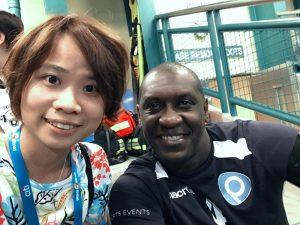 Football celebrities are mostly friendly. I think what made my experience with them special is that, when you are in the position of a journalist or emcee, you can have some unique interaction with them and I can still recall the interesting conversations I have had with Heskey, James, Mignolet and Owen. 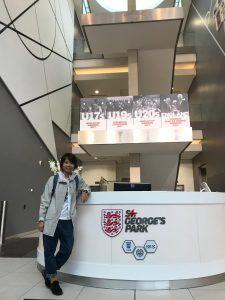 Tsang is a huge supporter of HK football and has had the chance to befriend many of the players and is delighted to have seen the progress they have made over the years.

“I also treasure the opportunities I had meeting local players. I still recall at the very beginning of my sports journalist career, I used to cover Sun Hei games and training sessions lot.”

“Almost everything was eye-opening as a fresh graduate. The Hong Kong footballers are generally down to earth and become your friends.”

“Over the years, you can see them transform and change and you support them as friends. People always ask if I have one name or one specific story which I have the deepest impression throughout these years as a sports journalist, I’d always say it’s so hard to highlight just ONE. To me, it’s the whole experience, all the friendships and connections you’ve built, faces you’ve met, things you’ve seen locally and overseas, makes my journey as a sports presenter/journalist worthwhile.”

“As a Hong Konger, Hong Kong team games are always special with that Hong Kong spirit and atmosphere. As a Liverpool fan, whether it was 2003 or  2017 when Liverpool came to Hong Kong or the Merseyside derby I saw at Anfield, I really treasure watching Liverpool!” 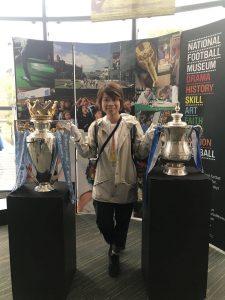 At the National Football Museum in England

As a long term HK football observer, Tsang gave her views on how the game can improve here.

“I always believe to take the sport to another level, it’s both a top-down and bottom-up process. While those with power should apply feasible and useful measures/policies at the same time, the general awareness in the value of football should also be enhanced. For example, how being a footballer can be a profession and career which can assure parents to let their kids pursue this route. Once that potential of football is more valued and established, the football playing population will increase thus the standard of HK football and related job opportunities will also increase.”

Tsang is keen to help fellow sportswriters gain greater exposure and has helped create an organization where ideas and opportunities can be exchanged. 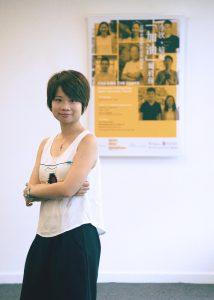 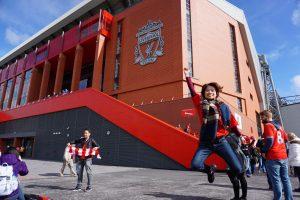 Outside Anfield in Liverpool

Tsang is also an athlete herself and has immersed herself into the world of floorball which is growing in Hong Kong.

Tsang is a published Writer

“I started playing floorball as my field hockey friend introduced the sport to me. I’m a late starter comparatively speaking (to those in other places who started to play when they were kids) but I think I’ve been a dreamer at my early age so I think that persistence will make up for it.

I think basically all ages can play as long as safety is guaranteed. I’d love to see more people playing floorball, joining me at my team, Hong Kong Kiddos! 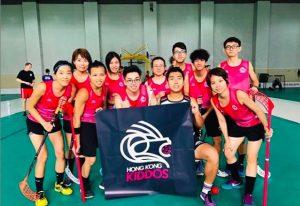 This year, originally I have been planning to spend a longer time in countries (like the Netherlands)  with a higher standard to level up my skills and bring back experience. However, the plan has been disrupted by Covid-19 and it has made it more challenging in managing resources and arrangement.”

Tsang loves sports and is delighted to have made a career from her interests and is happy to keep promoting the HK sports scene for all.

For More on the Journalist Project, go here: https://www.facebook.com/chasingthechase.hongkong